Every now and again I like to be a lady who lunches, or who takes tea, so when I noticed that a local 4 star hotel and spa called Rowhill Grange offered a champagne afternoon tea I booked it up so Matt and I could give it a whirl.

I have had tea at quite a few London venues, my favourites being The Wolsely and The Lanesborough hotel. Matt has never had afternoon tea anywhere, and probably thought it was a bit poncey.

We were greeted by a rather stiff and bored looking man who advised us that we would be at table 305.  Considering neither of us work there I am not sure why they thought we knew where that was, and on a hot and lovely sunny afternoon we had wanted to be seated outside on the patio area, but were not given the option.  We were led to a rather dingy wood panelled room instead and seated, incredibly bizarrely, on a very low sofa with a very low table.  I did attempt to sit on the sofa but at 6 foot 2 in my wedges it was almost like I had folded myself in half, so moved to the chair, which was still ridiculously uncomfortable and so much higher than the table it was rather annoying.  Poor Matt then had to sit on the dodgy sofa. 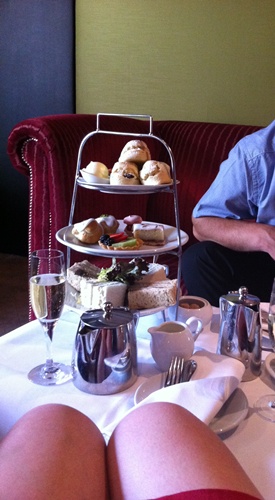 See how much higher I am on the crappy sofa!

After being given our champagne we were asked if we would like our tea, I presumed they meant the actual ‘afternoon tea’ cake stand thing as we had our champagne just delivered, but it appeared that they actually just meant our teapot!

All of this is completely opposite to what I have experienced at other hotels. Usually as I entered the hotel, the doormen were really warm, they direct you to the tea room, there’s normally a host or hostess who looks after you too but we didn’t have that (unless it was the stiff bored man).

The room we were in had no ambience and we felt we had to whisper when talking even though in far nicer places we could chat normally, the Wolsely being very loud and busy and The Lanesborough the staff and pianist will chat to you and share a joke.  I didn’t see any flower arrangements  in the room we were in and the music didn’t fit the tone of an afternoon tea.

Amazingly, despite the sub par surroundings, the feel of the place was very pretentious and the staff repeatedly ignored us and others seated who had run out of tea.  There wasn’t as much food as I have had at other teas and especially going with a man we were in need of a few more sandwiches, every other place I have been to keeps you topped up with sandwiches and tea until you are full so it seemed bizarre that nobody checked we had had enough.  After half an hour of being ignored Matt finally went and found someone who said that our tea and sandwiches would be delivered imminently.  Another ten minutes went past and then he came back and told us there would be an extra charge for the sandwiches!  Matt was so peeved by this point he just asked for the bill, I can’t blame him!

You may be wondering about the actual food?  It was a typical array of sandwiches, scones with cream and jam and of course, cakes; everything was….edible.  The sandwiches were not imaginative at all and were bog standard egg, cucumber, ham or salmon, you couldn’t even taste any mustard or seasoning on anything,  the scones were far too heavy and chunks fell off when you tried to spread the cream or jam on them and the cakes were too heavy and cloying, for example a profiterole with pistachio cream had been doused in royal icing? Not sure what that was about.

I’ve been to other tea rooms, not one has been anywhere near this bad. I would honestly have preferred to spend my money on a bottle of water and a sandwich in Boots.  Overall – 0/10 and I feel totally robbed of my £40