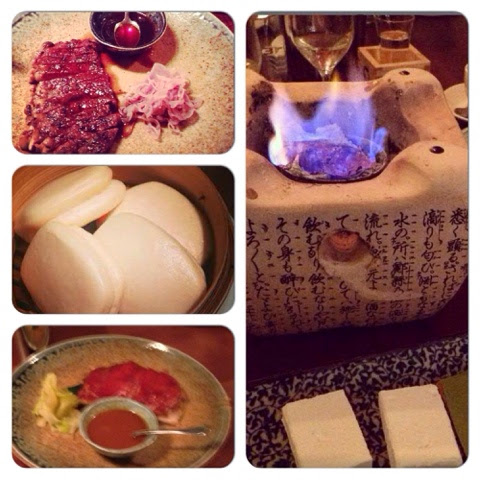 I decided to visit the fairly new hipster hangout called Flesh and Buns yesterday in Covent Garden, London.  We booked well in advance and this was probably a good idea as on a Wednesday night at 7.30pm the place was quite full.

The restaurant is at basement level and you have to walk down some stairs to get inside, once inside there are tables and booths for large groups and other diners have to sit at a long, Wagamama style table down the middle of the restaurant on high stools (not the most comfortable).

I enjoyed the communal dining concept and the atmosphere although it was very very loud!  The restaurant is large with the style being quite minimal, white walls and lots of dark wood are the order of the day, there is a bar and also a semi open kitchen.  The bathrooms made me giggle as they are covered in pictures of naughty manga cartoons, I found them funny but to be honest I think some people would be quite surprised by some of the things written on there, it might not be appropriate for young children, elderly etc. 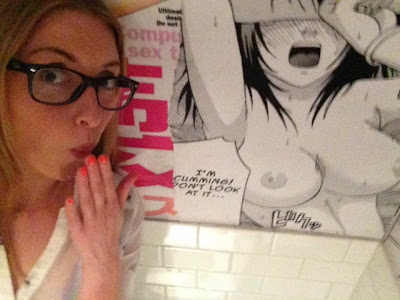 We decided to order starters as the waitress explained the portions are quite small, we had tempura prawn sushi and mixed sashimi.  The sashimi was gorgeous, especially the yellowtail, the prawn tempura sushi was good but at only 5 pieces between two it was a bit of a stingy portion, and also why were there not an even amount of pieces for 2 people?  I think the portions and presentation could have been better, it definitely didn’t surpass the same dishes from Sticks and Sushi restaurant but I would give it a good 8.5/10 rating.

For the main we decided to share half of the ‘flesh’ we each ordered so we got to try two things, we both decided on the crispy piglet belly and the sirloin steak, with two bao buns each. The pork was amazing, it had perfectly crispy skin and the meat was so succulent it just fell apart.  The pork came with pickled apple and a mustard dressing, which were both delicious too. The steak was one of the best I have ever had, cooked (medium rare) to perfection, seasoned perfectly and just overall amazing, there was a sauce with this too but I was so interested in the steak I can’t really remember! 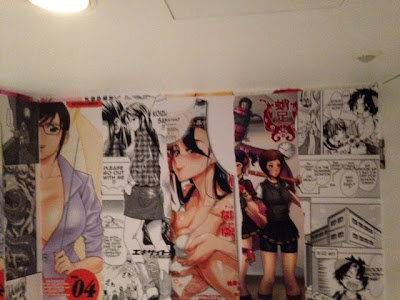 The buns were light and fluffy and making your little flesh and buns ‘burger’ up is quite a fun task and also means you can personalise how much pickle and sauce, if at all, you add.  Each bite was heavenly and, while I was glad I only got two buns as I felt quite full at the end of the meal, I think guys, those with big appetites or just someone really hungry would be better off with three buns per person rather than two as you do end up with more ‘flesh’ than ‘bun’ with only 2 buns.

I certainly wasn’t planning on having dessert but I saw someone had some sort of fire being delivered to their table and toasting marshmallows over it and I had to get involved, marshmallows are my favourite thing in the world!  We shared one portion of the Smores dessert which, at £8 was a bit pricey for some biscuits and marshmallows but it is definitely a show-stopping dessert, along with the danger factor of toasting your marshmallow over an open fire after a cocktail and some wine! One portion includes two large marshmallows, green tea chocolate (which was surprisingly tasty) and the biscuits. I really did enjoy this dessert and it’s certainly a lot of fun.

All in all it was a great meal and I would definitely recommend going there, my suggestions would be to skip the starters and go for the steak, don’t go to the loo if you’re easily offended and get the smores!

Our bill was £43 each including two starters, two mains, two buns each, dessert to share and a glass of wine each.