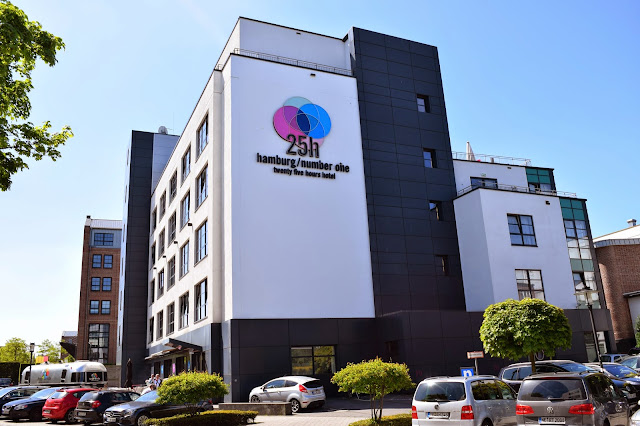 Last weekend we took a trip to Hamburg. Hamburg is a major port city located on the Elbe River in northern Germany.  With a population of nearly 2 million, it’s Germany’s second-largest city and also the wealthiest city. This was my first time in Germany and it exceeded my expectations completely.  I had made the incorrect assumption that Germany was rather grey and dull, and it wasn’t at all.

We stayed in the Bahrenfeld area which is slightly outside of the city centre, although very easy to access by cab or public transport, as it’s near a bus stop and about a 5-minute walk from Bahrenfeld station.  You can purchase group daily travel tickets from the ticket machines to save you money if there are 2+ people travelling.

The hotel we stayed in was the 25 Hours Hotel Number One.  It’s a fun, trendy place with a retro vibe and décor which I instantly liked.  They said that the video nights which were offered is what they do in hostels so people can make friends, I thought was a cool idea if you are travelling alone, as surely you would want to meet other travellers, and this would be a great way so you don’t spend all your free time in your room by yourself. 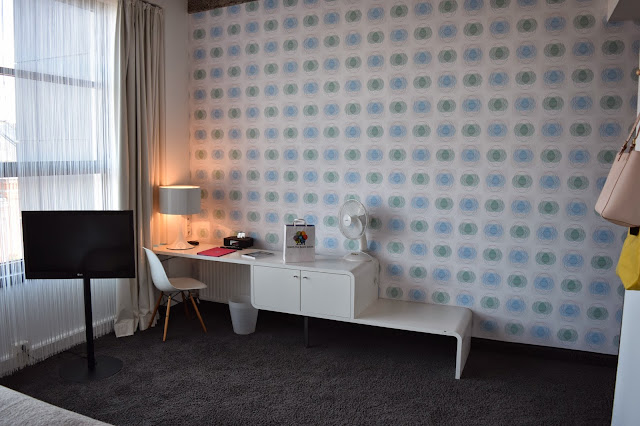 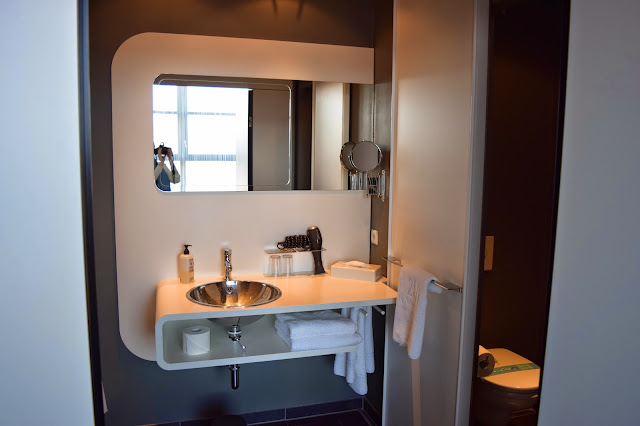 We had a fantastic time there and I completely recommend staying either at this hotel if you prefer to be slightly away from the centre of town or at the other 25 Hours Hotel in the city centre.  Normally I would like to be more central but as Hamburg has a famous red light district area full of nightclubs and…other clubs (ahem)!  I found it much nicer and quieter to stay in a more tranquil location surrounded by trees and fields. 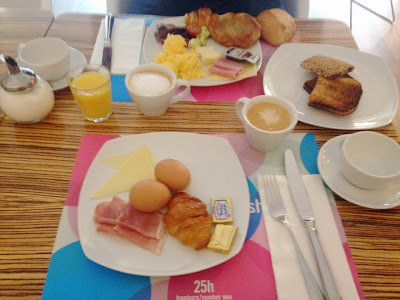 The rooms are spacious and expertly designed and the huge bed has two separate duvets so you don’t fight over who stole the covers in the night, a genius argument-avoiding idea!  The bathroom is spacious with a separate toilet and the rooms come equipped with great toiletries, a hairdryer (essential) and an iPod dock so you can play some music when you get ready for your nights out.  The restaurant served up delicious breakfasts with a large variety of food on offer and the staff were so kind and friendly throughout our stay.  The staff speak English very well, which was handy as our German consists of just a few words (Tschuss, Nein, Danke and Wunderbar) but then bye, no, thanks and wonderful are at least fairly helpful words!

There is a fab rooftop terrace with some lovely views, a gym, a welcome drink on arrival and rental bikes you can take for a spin, they even have a mini you can rent if you want to explore the area by car.  Definitely, a place I would recommend going or would go back to myself. 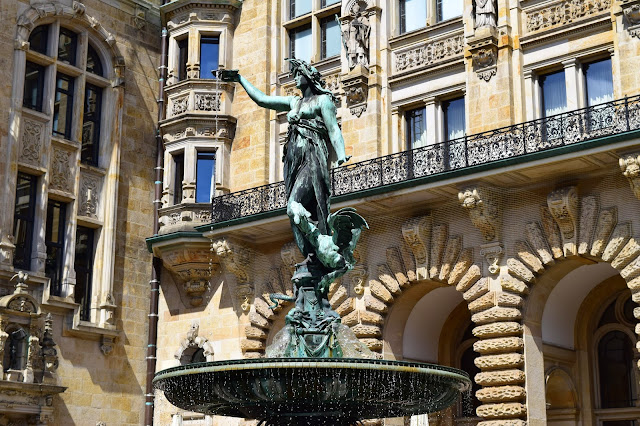 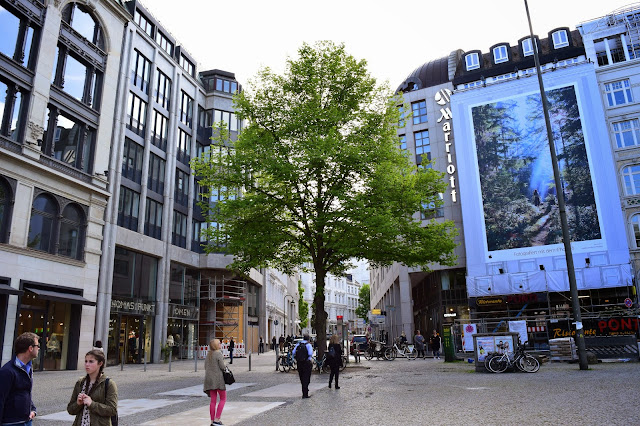 After settling in we set off exploring Hamburg and got a train to the central station.  To the west of the station, there is an area filled with shops which are called Spitaler Straße and Mönckebergstraße, and this area leads to the town hall.   We looked all around this area and stopped for a drink at a lovely bar on the canal called Ponton’s.

In the evening we went to Restaurant Freudenhaus, Hein-Hoyer-Straße 7-9, 20359 Hamburg-You can book via email: info@stpauli-freudenhaus.de  the food was amazing and typically ‘German’ which was what I wanted.  The portions are huge so don’t go for a starter unless you can pack away a lot of food! I had a Schnitzel and he had suckling pig.  I think we both agreed that the Schnitzel was the best thing ever. The setting, staff and food were fabulous and we stayed there for ages! Most importantly it was incredibly reasonable at around 65 Euros for our meals and plenty of drinks. 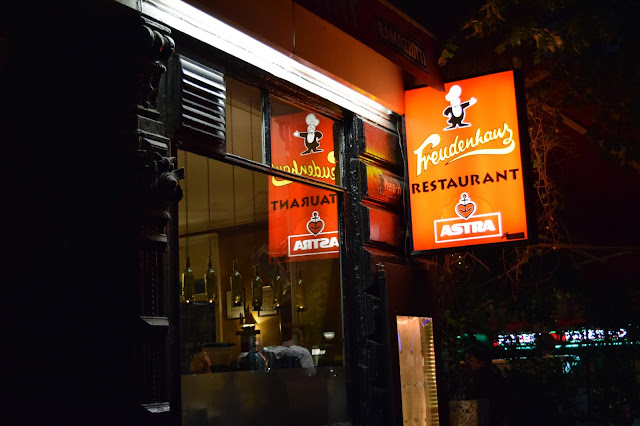 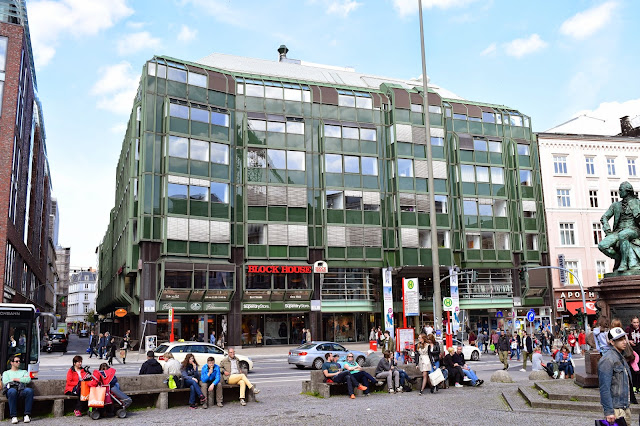 On Sunday we went to Hamburg’s harbour area.  It’s the city’s main attraction and we decided to take a boat ride to really see everything.  We saw lots from the boat, massive container ships and surrounding warehouses and beautiful houses that must be in the posh part of town, we even saw a tiny beach! This was my favourite part of the trip and I recommend you take the time to do this; it only cost 18 Euro each for an hour’s boat ride.

Behind the warehouse district, the HafenCity is a newly-developed area which has transformed the post-industrial environment with some impressive architecture. We walked all around this, down by canals and just everywhere that looked interesting. 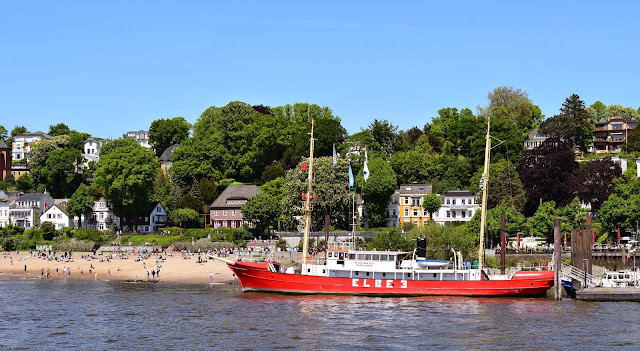 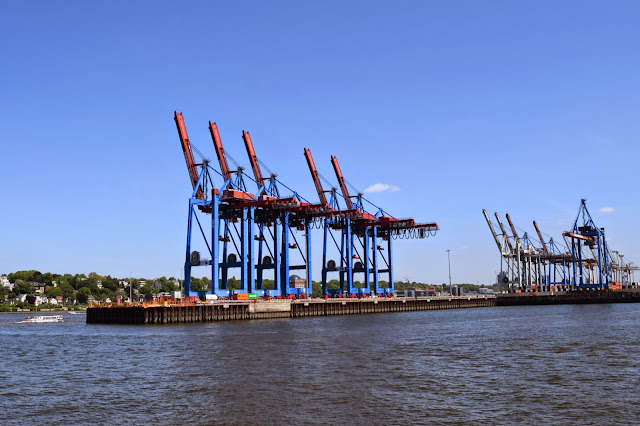 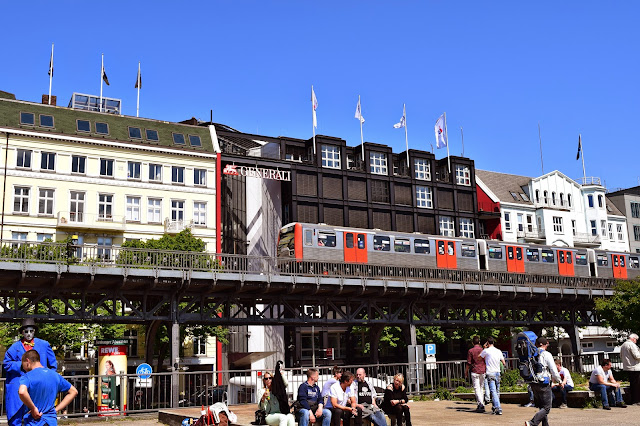 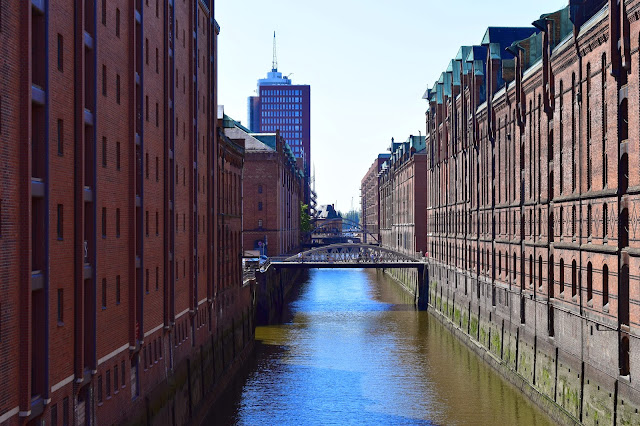 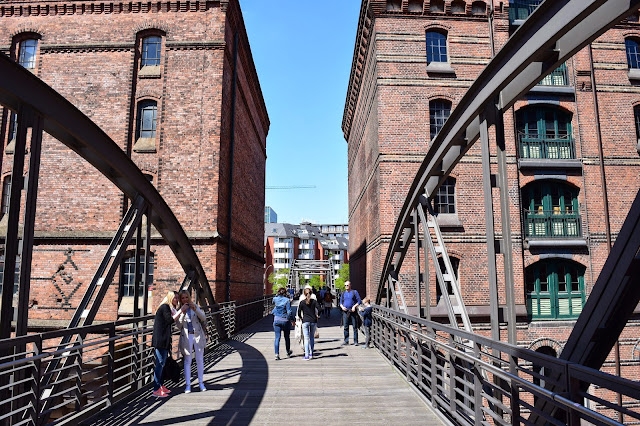 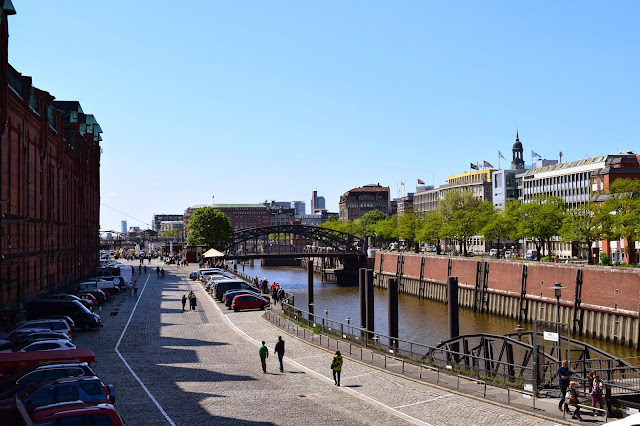 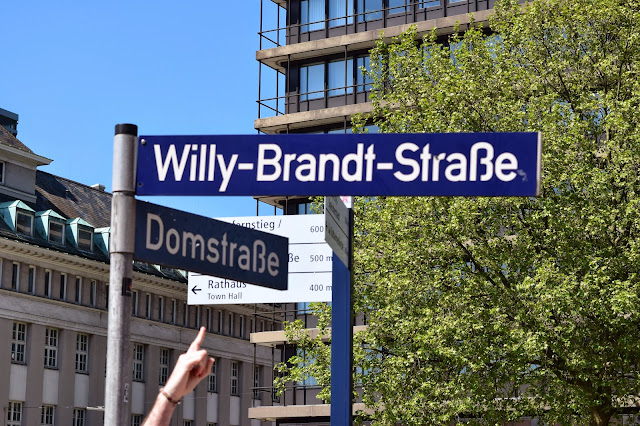 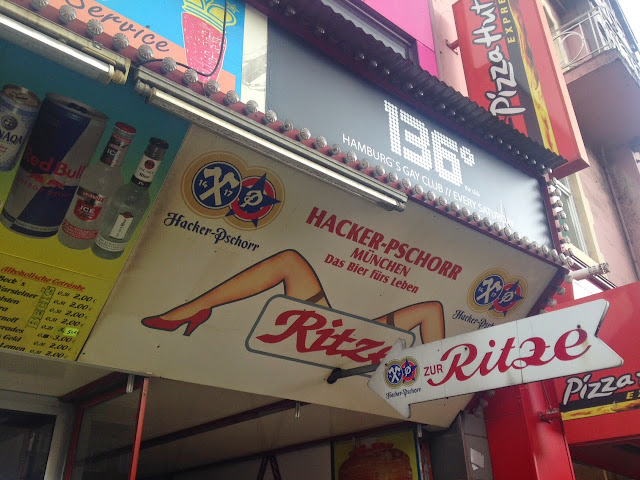 We went to the Reeperbahn which is Hamburg’s red light district and its nightlife hub. There are lots of streets and bars off of the main road with plenty of little bars and clubs, we went into a few and everyone seemed friendly
and up for a laugh, there wasn’t any trouble at all so very different to central London on a weekend. There were lots of fun things to see and do so I recommend having a look along here, it’s not just a creepy road full of suspect people!

There were some crazy people about, however,  we saw an old man dressed as a king (in a cape and crown) getting his groove on to an old school Lil Kim tune, and a lady casually doing some sort of sexy photoshoot in the middle of town around lunchtime, in broad daylight – you couldn’t make it up!

Other places we went include Zur Ritze, a rather old school German bar behind some saucy doors with spread legs painted on them, Beatles place where the Beatles first started playing in Germany to see the little statues and a little place that sells fresh pizza called Café Curious. We also randomly found a street festival with lots of stalls and foods so I got to try a Bratwurst and a Krakauer and they were both delicious. 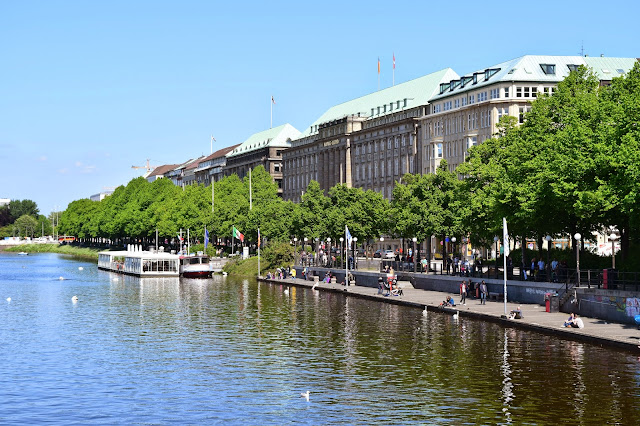 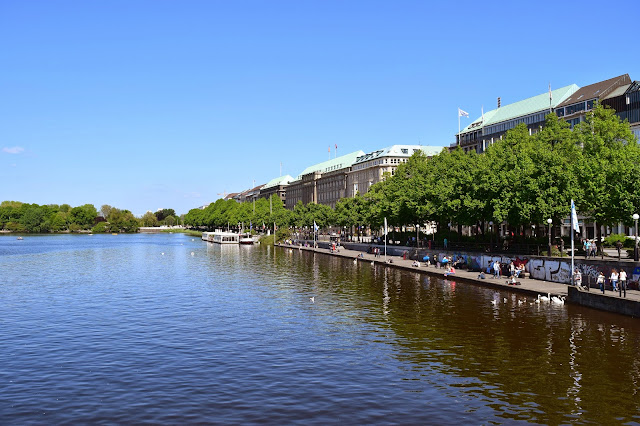 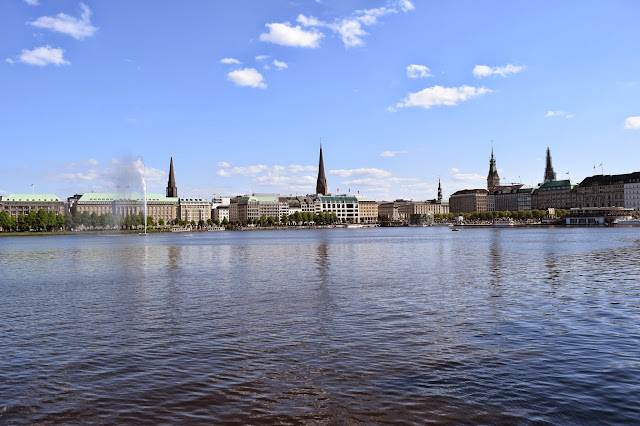 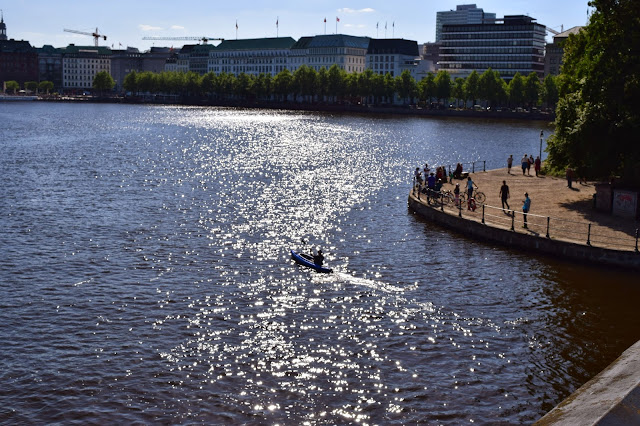 Both days we took a wander down to Alster lake which is breathtakingly beautiful, I got a bit snap happy with my new camera but everything just looked so pretty. The Alster is surrounded by cafés and restaurants where you can enjoy a meal or drink with a splendid view of the water. We went back just before we left to come home and had some drinks just by the edge of the water, which was really relaxing, they had some very reasonably priced Prosecco, which obviously needed testing out!

I loved Hamburg; the architecture was amazing and the rivers and lakes so beautiful and peaceful.  The people seemed pretty friendly and, despite what everyone at work was telling me, the food was great! What can I say;
I can’t resist a sausage (I mean Bratwurst…)! It’s really just a fun and chilled out place to be.  Definitely, a place to go if you love a city break, I didn’t want to come home at all.

Have you ever been to Hamburg?