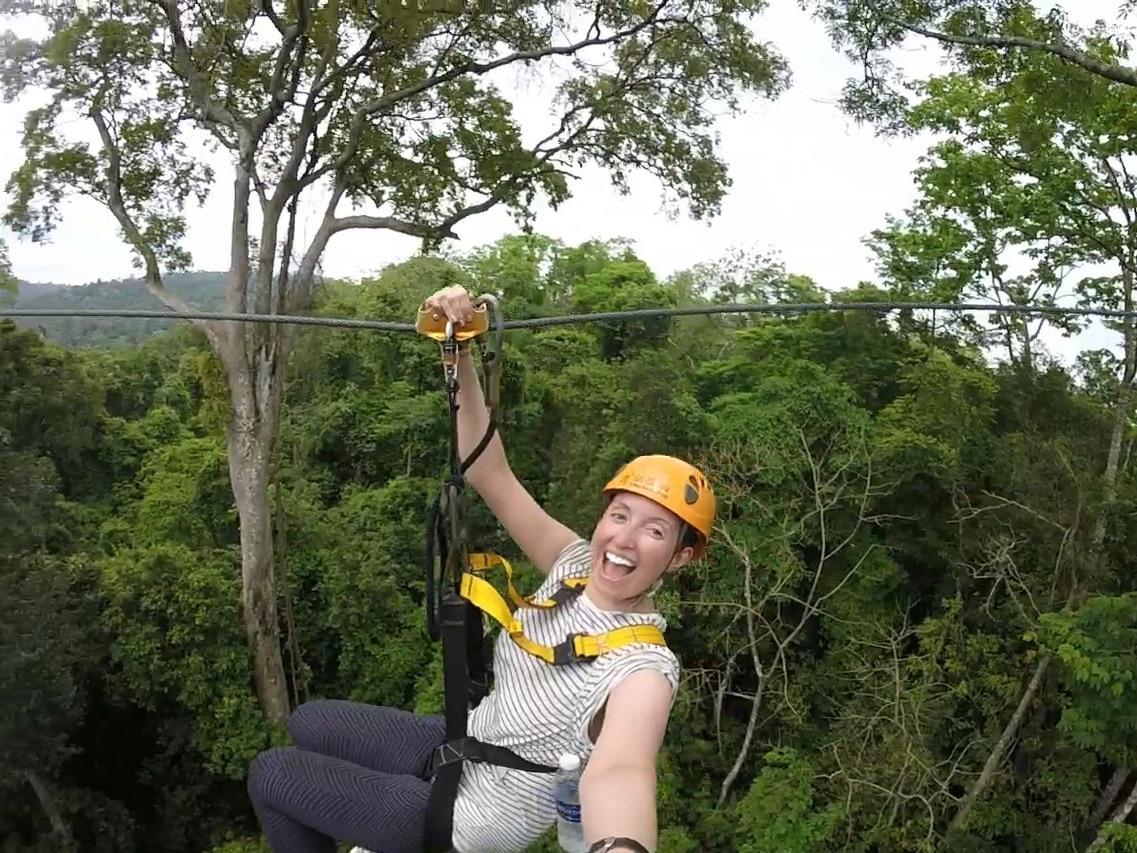 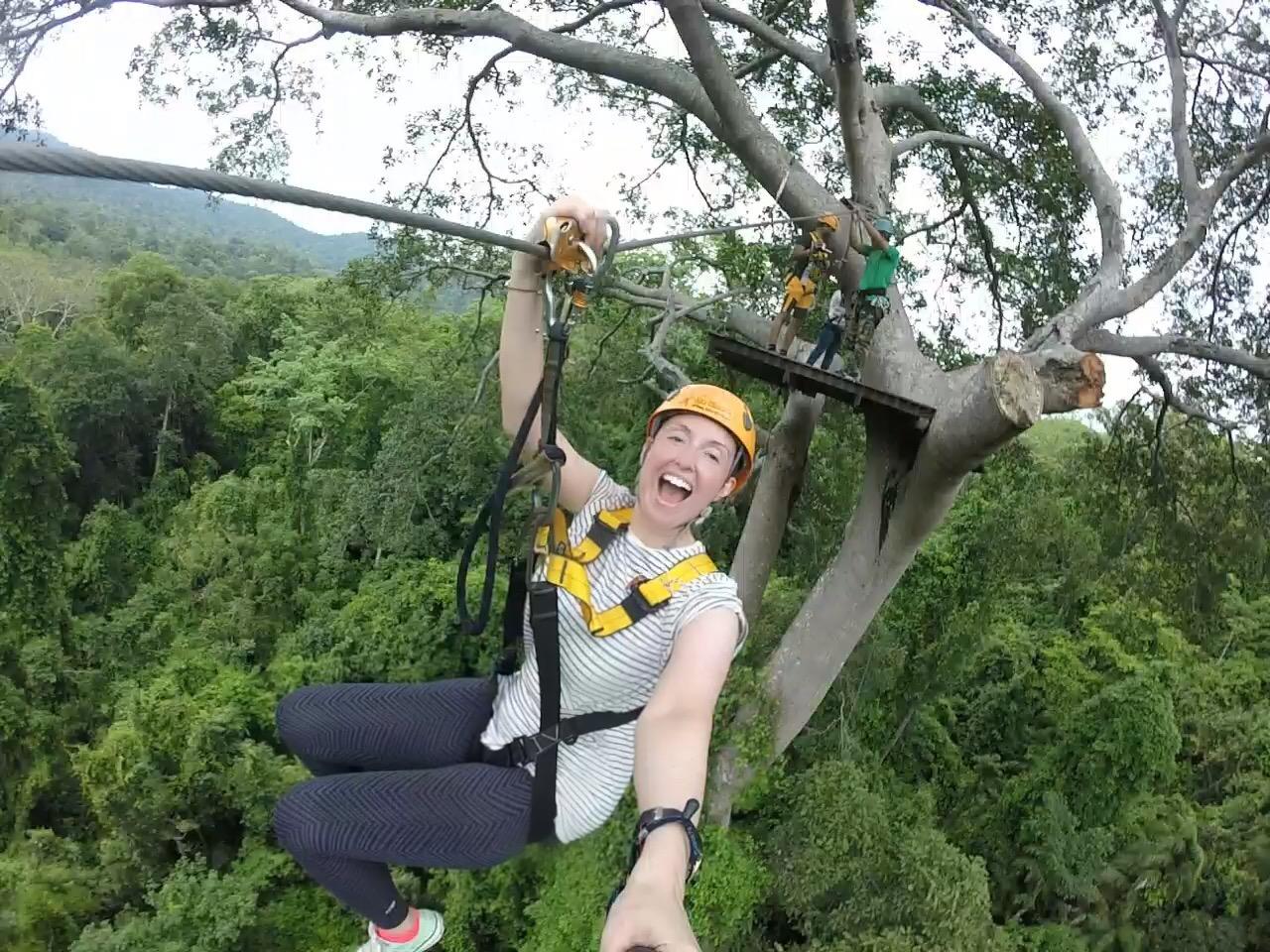 Flight of the Gibbon Review Bangkok

I decided I needed some adventure during my trip to Bangkok so after a quick Google I found myself at Flight of the Gibbons Bangkok!

The day started early with a free minibus pickup and fairly long drive to the Bangkok Flight of the Gibbons location, which is in Chonburi.

On the way I made friends with Choppy and Kaylee from Those Bucket Girls, a lovely coincidence as we had never met before.  Our tour group also consisted of a couple and their daughter.  The male half of the couple was swiftly nicknamed ‘Captain Grumpy’.  Or words to that effect… he spent the rest of the day being a gigantic pain in the butt.  You can choose your friends, but not your ziplining companions!

Features of the Chonburi course:

Upon arrival you would normally zipline first but the weather looked stormy so they decided to switch our day around.   The girls and I ate lunch first and then toured the safari park second.  Basically we switched lunch/safari so we didn’t have to deal with Captain Grumpy for longer than necessary.  The food was great and they accommodated Choppy and I with delicious veggie meals.

After a whizz around the safari park in a golf cart we got to feed giraffes and elephants!  This is not one of ‘those’ Thai zoos, so do not worry.   The animals had plenty of room and were not caged, they seemed well fed and species that get along were kept together.  After our trip around the safari park we went back to the office to get kitted out.

There’s a fair bit of walking between zips so I was glad I got kitted out with a water bottle tied to my harness.   The guides kept us laughing as we were strapped in.  Then we walked through the jungle in the sweltering heat up to our first zip platform.

Flight of the Gibbons’ attempts to educate about the forest includes signs along the hikes and at the platforms with statistics about rainforest loss.  These are shocking, and I was pleased to hear that Flight of the Gibbon works to plant trees and re-establish the biodiversity of the areas they work in.

As we started ziplining we were told there were 23 platforms and 2 abseils! I was a little nervous on the first zip but after that I loved it.  As you can see from the pictures!   In addition to straight zipping you can do tandem zips and even a bit of abseiling.  It wasn’t scary, although I did nearly hit a tree on one zip!

While safety was a top priority with helmets, tight harnesses and training beforehand we were allowed to have a joke about and to go hands-free on the lines if we wanted to. 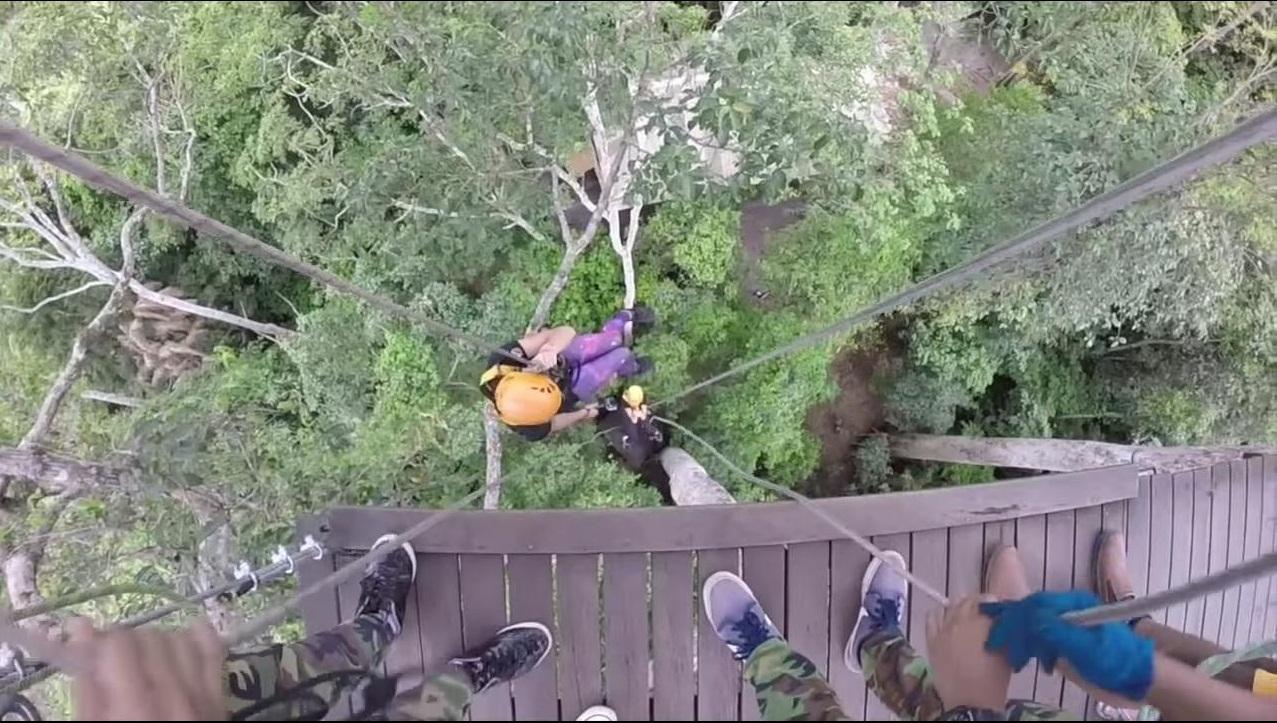 Twice during the course we abseiled from platform to platform. It was a bizarre sensation as I’ve never done abseiling where someone else is controlling your rope!  The final abseil at the end of the course was pretty damn high (pictured above).  But really enjoyable.

After our zipping fun we headed back into the van (unfortunately avec Captain Grumpy and embarrassed family) and off we went back to Bangkok.

Thoughts on the Day

What were my overall impressions? It was a huge and varied course through the beautiful rainforest.  The guides were hilarious and very helpful.  We were allowed to bring cameras and Gopro’s and there was a handy locker to keep my backpack in whilst ziplining.

Flight of the Gibbon Information

If I’m honest that is a bit pricey, but I think it was worth it for my first try ziplining.  They also have locations in Chiang Mai and Cambodia.